WaveMaker is a composable experience development platform powered by the paradigm of low-code. With every new release, we at WaveMaker, attempt to carve out features that help enterprises and professional developers build captivating user experiences in sync with market demand.

Enterprises can embrace composability only when the tools that they adopt enable it. Keeping that in mind, our team at WaveMaker has built the next big thing for the world of composability through low-code—WaveMaker 11.

Here is what we have got for you this year!

With around 3.8 billion smartphone users worldwide, mobile app builders are constantly looking at ways to drive better engagement, reduce drop-offs and increase in-app growth. In short, mobile app adoption is driven by the user experience that they offer.

On the other hand, ISVs and enterprises find it difficult to create consumer-grade mobile applications with run-of-the-mill tools that are either specific to a device or OS or, simply do not have an integrated platform to create both web and mobile apps. Moreover, customers are not content with responsive web experiences force-fitted within mobile apps. The UI and the associated user experience on web apps are just not good enough. 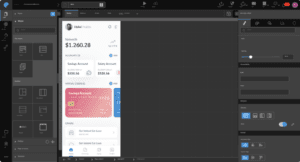 With React Native studio added to its kitty, WaveMaker is raising the bar in mobile app experience development one notch higher. Additionally, all web applications created in WaveMaker can be also made available as Progressive Web Applications, offering a plethora of choices for our customers.

We truly believe that if you are already a WaveMaker subscriber or considering the platform for your mobile app development efforts, the addition of React Native studio to the platform increases the value of your investment substantially.

The application modernization services market size is estimated to grow to $24.8 billion by 2025. A large chunk of this modernization effort can simply be attributed to upgrading the tech stack or modernizing the UI. However, in many cases, the cost of upgradation and the configuration hassles that come with it outweigh the benefits of modernization and as a result, companies are forced to take a step back.

Customers need seamless and smooth user experiences. Building such performant applications needs an API backend that is fast. The new release aims to bring composability to the API layer, allowing multiple APIs to be combined together to create unified experience APIs.

The API Composer Toolkit allows WaveMaker developers to build APIs on top of existing systems that are just right in terms of verbosity and comply with the “Principle of Least Privilege” security rules. Using the Spring framework, this tool allows the creation of unified experience APIs that are designed keeping in mind the  ‘backend for the frontend’ design pattern. With API Composer Toolkit, developers can now leverage the use of a single Java Service API that calls multiple APIs(REST/Swagger/Database) and consolidates their responses into one Response Object thereby reducing time and code complexity.

To know more about the API Composer Toolkit, click here.

Get support for Azure Repos VCS

WaveMaker Studio already comes with a version control system that runs within your platform machine. This is based on Gitlab. Additionally, WaveMaker Teams customers can choose to add an external repo of their choice like their own instance of GitLab, GitHub, or BitBucket. With WaveMaker 11, team admins can configure Azure Repos Version Control System (VCS) for storing project source code. You can now easily set up CI/CD pipelines to build and deploy WaveMaker-built applications on top of your enterprise version control system. Not only is there a reduction in the total cost of ownership of WaveMaker, but it also enables Teams customers to use existing IT infrastructure.

WaveMaker has always stayed true to its promise of building applications that are safe, secure, and easy to run. Enabling an additional security layer by configuring MTLS (Mutual Transport Layer Security) for all REST APIs is a feature directed toward building secure apps. With this feature, when you import APIs into WaveMaker to build your apps, you can now set up the SSL connection between WaveMaker and your APIs to use MTLS.

For more information, see MTLS in the WaveMaker application and a detailed blog about MTLS.

WaveMaker applications are built to 12Factors.app principles. One of the ways WaveMaker apps can be deployed on horizontally scaled infrastructure is to build them to be stateless. With WaveMaker 11, application sessions can now be configured to use a distributed cache. We already support DB, and REDIS and have now added MongoDB to offer more flexibility during the deployment.

Debug and monitor with Devtool - a WaveMaker Chrome Extension

Debugging and monitoring your applications can be a daunting task. Make debugging your application easier with WaveMaker Devtool. Installing this chrome extension will let you debug and monitor WaveMaker 11 applications in preview via the ‘inspect’ mode. To further enhance developer productivity, this browser plugin enables developers to track and profile API invocations, page load times, prefab load/render times, etc.

Leverage the change in the POM hierarchy

Take advantage of a simple yet powerful pom.xml and create a clear separation of the WaveMaker platform from application-specific dependencies. The new POM contains fewer lines than before and has been remodeled to inherit from the parent POM making it easily readable and comprehensible.

Upgrade to the new version of SAML

All WaveMaker projects that are using SAML(spring-security-saml2-core) as a security provider will be migrated to a new version of SAML thus removing the dependency on Spring extensions that have reached the end of life.

Collaborate with ‘Teams’ on WaveMaker Enterprise

Teams, a collaborative development environment is now shipped with WaveMaker Enterprise too. Within one enterprise installation, you can onboard multiple Teams, while giving each Team ability to manage projects, roles, and code repositories, add or remove team members, grant permissions, and more. Read this blog to know more about what Teams can do for you.

Our freshly minted React Native studio brings low-code and React Native mobile frameworks together, allowing mobile app composition using prefabs. For a WaveMaker developer, there is no new learning curve; for a mobile developer, there is the flexibility of low-code, the feature-rich app development framework, and the support for easy composability.

This new release is a milestone for WaveMaker. This release, while offering composability at the API layer, allows unified experience development. Additionally, the API Mock Server increases developer productivity with mock APIs that can be created during development. This enables UI development teams to continue building the experiences using low code without the need for a fully developed/functional API.

WaveMaker 11 GA brings with it a host of other features that increases the value proposition of being subscribed to WaveMaker. From Flex Layout Widgets, Java 11 upgrade, and pagination for imported APIs, to multi-version studios, WaveMaker 11 GA aims to increase the value proposition for WaveMaker subscribers and prospects alike. With this release, we can truly say that composability and seamless native mobile app development is just an upgrade away!

To read the full list of features in WaveMaker 11, please read the release notes here.